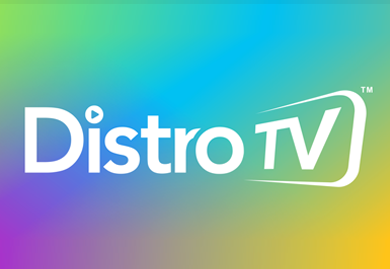 150+ channel lineup now includes Bloomberg Quicktake, Bloomberg TV and Us Weekly, among others

San Bruno, CA, May 26, 2021 — At a time when content consumption across streaming TV services is at an all-time high, DistroTV, the largest, independent, free, ad-supported streaming TV (FAST) platform, sets its sights on diversifying its content offerings to its rapidly growing global audience. The streaming service today introduces a number of new live streaming channels to its lineup in the pop culture, news, sports, and entertainment realms. DistroTV operates under parent company DistroScale and caters its growing, multicultural content lineup to a wide range of passionate viewers in the US, Canada, and the UK.

“We are living in a time in which there is a pressing need for content diversification, as viewers across the globe continue to look toward streaming services to fulfill their knowledge and entertainment needs,” said Navdeep Saini, co-founder and CEO of DistroScale, parent company of DistroTV. “We remain committed to expanding our content offerings as our viewership grows. The ultimate goal is to continue to deliver content to our viewers that matches their unique interests and passions.”

DistroTV continues to partner with innovative content creators and brands as it expands its own content platform. The streaming services recently added the following channels to its lineup, catering to a diverse and multicultural audience:

DistroTV has built a solid core programming lineup of popular mainstream film and television channels, including Reelz, Law&Crime, Qello Concerts by Stingray, Magellan TV, People TV, and TD Ameritrade, among others. Additionally, DistroTV has responded to the growing need of diversity among its independent channels focus on some of the following: Kweli TV, which spotlights the rich history and global diversity of the Black community; Canela TV, featuring Spanish programming; Latido Music, the leading channel for Latin music; BritAsia Live for British Asians around the globe; Filmeraa, short-form movies and television in Indian and Korean; Venus TV, which features popular Bollywood movies, culture, and more. The FAST platform also is beginning to enter a new category, in which it offers shows, such as Operation Repo and World’s Strongest Man, as standalone channels.

DistroTV is a natural extension to DistroScale’s expertise in video platforms and advertising space. DistroTV provides brands the opportunity to build a direct-to-consumer relationship with DistroScale and its network partners. Since its launch in 2019, DistroTV has taken note and delivered on the demand for growth concerning its breadth of content and global audience figures. In the last six months, viewership quadrupled and total watch time multiplied eight times over. The streaming platform continues to focus on building a robust global network that delivers news, entertainment, music, sports, and lifestyle programming to international audiences. To become a part of this international audience, visit https://www.distro.tv or install DistroTV on Roku, Amazon Fire TV, Apple TV, iOS or Android.

DistroTV is the largest, independent, free, ad-supported streaming television service on the market. Launched in 2019 by parent company DistroScale, the platform caters to a multicultural, rapidly expanding, globally-minded audience of passionate viewers in the US, Canada, and UK. Satisfying the growing demand for premium video content in multiple languages, DistroTV delivers premium video content from producers globally across North America, the UK, Bollywood, Latin America, China, Southeast Asia, and growing. With more than 150 channels plus thousands of Video on Demand (VOD) shows, DistroTV cultivates content that covers a broad spectrum of topics to connect with people’s passion points around Entertainment, Lifestyle, Sports, News, Documentaries and International Content in live, linear and video-on-demand formats. DistroTV is available on the web, as well as through Roku, Amazon Fire TV, Apple TV, and iOS and Android devices.

DistroTV is the first direct-to-consumer offering from DistroScale, a technology company founded in 2013 and known for providing a global clientele of thousands of media properties with the industry’s most comprehensive video platform for web, apps, and streaming. DistroScale is an all-in-one solution providing infrastructure, content delivery, curation, analytics and a full suite of monetization options. Video enabled by DistroScale reaches more than 250 million visitors per month. The company is headquartered in San Francisco, CA. To become a DistroTV viewer, visit www.distro.tv. More information on DistroScale & DistroTV is available at www.distroscale.com.