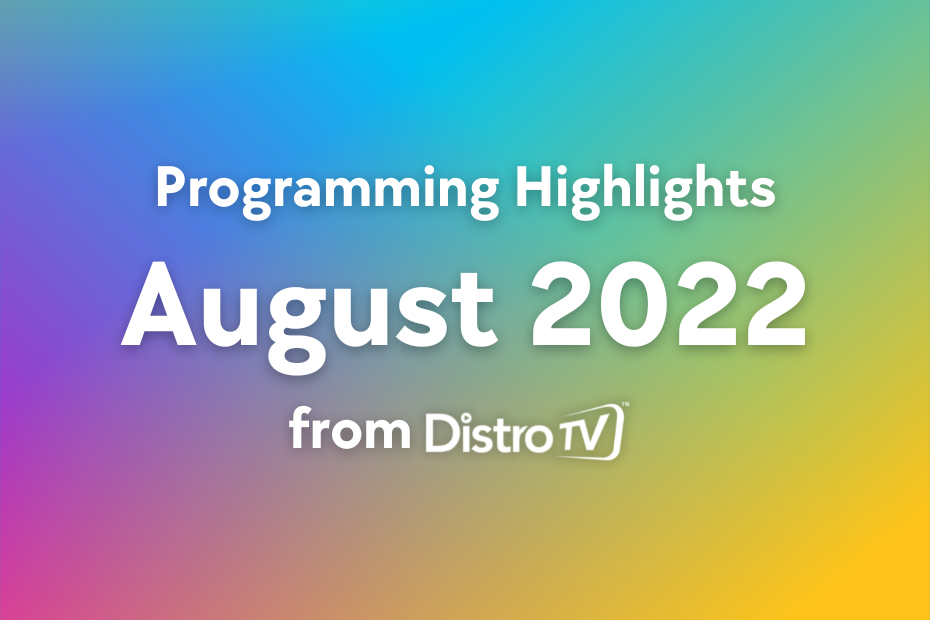 Take a look at what DistroTV has in store for August.

Summer break is almost over, and you know what that means! It’s back to school time! But that doesn’t mean the summer fun is over just yet. Check out what DistroTV has in store for the weeks leading up until the school year.

Stingray Music | Students will want to tune in to Stingray Music audio channels to reminisce on their summer fun. From hits they sang on road trips to their favorite summer anthems, Stingray Hit List, Pop Adult, Greatest Hits have them all throughout August.

MagellanTV Now | Take in some amazing views of space, learn about the magic of numbers, explore megastructures, and unlock the secrets of quantum physics. Plus, some of our favorite hosts are joining the party. Jim Al-Khalili teaches us all about The Amazing World of Gravity and Nigel Latta. Starting August 15.

Comedy Dynamics | It’s that time of year where all the kids are heading back to school! Celebrate Back to School day with all your favorite former teacher comedians and their rambunctious tales from the classroom! Catch Glen Tickle: The Favorite at 8pm EST on August 15.

GustoTV | Time to get back to school – with Gusto TV! Whether they’re a parent, a college freshman, or anything in between, viewers will want to tune into this all-day marathon on August 27th to see chef Spencer Watts cooking his heart out. Every dish cooked in 30 minutes, for under 30 dollars. Quick, inexpensive, delicious meals that fit the tightest budgets and busiest schedules!

Life can be stressful. It’s important to take care of our minds and bodies, especially today on World Relaxation Day. Tune into DistroTV for relaxing music, fitness programs and more to feel calm.

Stingray | This special day is dedicated to slowing down and unwind from the fast-paced hustle and bustle of everyday life. Visit the Central Pacific Coast in Costa Rica, peaceful farms in New Zealand and more. Viewers can find their Zen on August 15th, all-day.

Get ready to giggle! It’s National Tell A Joke Day this August 16th and DistroTV is bringing you the funniest programming that will keep you chuckling all day long!

WhistleTV | On the National Tell A Joke Day we bring you Bad Jokes Marathon, a battle of bad comedy.

Celebrate Women’s Equality Day with programming on DistroTV that celebrates and honors the passage of the 19th Amendment to the U.S. Constitution that granted women the right to vote.

Docurama | Starting approx. 4:30p ET – Docurama commemorates Women’s Equality Day on August 26th by showcasing the achievements of inspiring women. Featuring titles including: A Walk In Her Shoes, A Lady Doctor, Fight Like a Girl, She is the Ocean, and Birth Story: Ina May Gaskin and the Farm Midwives.

This August, DistroTV Desi will be honoring and recognizing the following dates on social media.